The scooter's frame is made of aluminium and is therefore durable. The casing is IP54 water-resistant. When riding in the rain, splashes and dirt from under the front fender will fly directly onto the trousers, whereas this problem does not arise with the rear fender. The rubberised grips are comfortable - their angle of inclination can be adjusted to suit the rider's preference. It's a fun ride for everyone in the family because the steering wheel is very adjustable and the maximum payload of 130kg allows two to ride together. You can even drop your child off at school on the wide and sturdy deck or take him to the nearest delivery point and pick up a heavy load.

The scooter is ready to go right after unpacking. The unfolding process consists of four steps: first of all, you push the folding lever, then raise the steering column, then clamp it with the lock and finally insert the handles into the grooves. To fold, carry out the same steps in reverse order. If you get used to it, you can put it together/dismantle it in 10 seconds. Speaking of the lock: when you move on uneven pavement from vibration it constantly snaps off, so you need to watch its position closely and correct it.

When folded, the scooter can easily fit into the boot of a standard sedan. It's not easy to take it up stairs or onto public transport, as it's large and weighs around 23 kilograms. In addition, the unusual appearance of the device in the style of the action movie "Mad Max" attracts unnecessary attention. 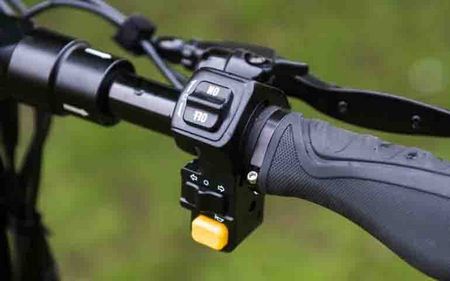 On the right side of the steering wheel there is an on-board computer with three buttons. Information on it is clearly visible both in direct sunlight and at night - thanks to the backlight. A long press on the centre button switches the power on or off. Short presses change the displayed data: total mileage, kilometrage of the current journey, time, battery voltage. Speed, drive mode and battery charge are also shown permanently. Under the computer the accelerator pedal with a very long stroke is located. If you press it all the way down, it becomes difficult to reach the brake lever. Fortunately, the manufacturer has arranged the brakes differently than on most bikes, with the front brake under the right hand and the rear (main brake) under the left.

On the left hand side of the handlebar there is a lot of stuff. There's also an electronic horn button (along with the classic bell), which you accidentally press every now and then. Its sound is specific and loud: passers-by, move aside! Nearby there is a toggle switch to activate the headlights and LED lights. Below that is the indicator lever, which is a rarity on electric scooters.

The scooter is equipped with four shock absorbers - two on each wheel. They are great for smoothing out the bumps in the road. For example, the famous and not always neatly laid Moscow tiles are not felt at all. Ten-inch inflatable wheels also add to smoothness of course. It is possible to storm curbs due to the 15 centimeters clearance. Off-road, the Model A continues to perform with confidence - in the woods, it has no problem climbing tree roots and holes, while the powerful engine allows you to go up a slope of 15 degrees.

The model is equipped with a single brushless electric motor on the rear wheel with up to 700 watts of peak power. By the way, the HIPER range also includes the Model B - the same scooter but with two motors and four-wheel drive. Our copy has three modes. The first serves rather to help you climb ramps, the second is for a leisurely ride around town, the third allows you to pick up speed up to a maximum of 32 km/h. At the fastest pace, you feel a sensible kick, because of which the rear wheel starts to grind on wet surfaces, gravel and sand. This is something you have to get used to.

It's not necessary to push off with your foot to activate electric propulsion, and accidentally pressing the accelerator button results in a sudden start, which is not safe. The maximum speed decreases in proportion to the remaining charge, and this happens after a few kilometres. For example, after 4 kilometres the driving pace has dropped to 31 km/h, the speed has dropped to 28 km/h in four bars of the battery indicator, to 25 km/h in two, and to 20 km/h in one. The Model A has cruise control. It is activated after holding the accelerator for 5 seconds and this cannot be changed. The mode is useful on long journeys and on the open road. In the city, however, the automatic activation of the cruise control is a hindrance.

The two disc brakes bring the scooter to a standstill. Thanks to the large number of illumination elements, you are sure to be visible to other road users in the dark. At night, the light beam is illuminated by a bright LED headlight, which, depending on the incline setting, can reach up to 5 metres. On the underside of the deck there is LED lighting that illuminates in purple. On the sides are positioned indicator bulbs and at the rear of the fender is a large stop light.

The 12 Ah battery is housed in the deck, which has a positive effect on handling. During driving, depending on the load on the battery, the charge indicator on the on-board computer constantly jumps, so it's hard to track when the battery is really running out of energy. In Mode 3, the kick scooter can travel up to 32 kilometres with electric propulsion. The result is more than decent, taking into account the weight of the rider at 80 kilograms and the gravity of the scooter itself.

There is no recuperation in the device. When the power reserve is depleted, the propulsion is cut off dramatically, but the lights keep on working. This makes it possible to reach your destination on your own even in the dark, but not without physical exertion due to the mediocre roll and height of the scooter. The two-wheeler is charged via a proprietary connector located on the side of the deck. The port is covered with a plastic plug to protect it from dirt and moisture. The vehicle is powered from 0 to 100% in 6 hours and 40 minutes using the supplied power pack.
With the HIPER Model A, you don't have to think hard about how to get around broken sections of road, because the novelty will overcome most obstacles with comfort for the rider. The disadvantages, revealed during the test, are a few: permanently unbent folding lock, backlash of a steering tube after 150 km of run and non-informative display of battery charge level. Otherwise, the scooter boasts decent speed, long range, a bright headlamp, reliable brakes and soft suspension.