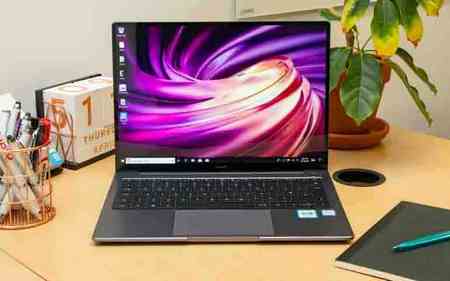 The design of the MateBook 14 is made entirely of brushed aluminium. Its size doesn't make it an ultrabook. Still, it's lighter and more compact than standard notebooks. The device is 1.6 cm thick and weighs in at 1.5 kg. In the best tradition of expensive laptops, the lid of our copy opens with one hand. There are not many available connectors, though it is not difficult to do without an adaptor. On the right side there are two USB Type-A, on the left side - one USB Type-C, HDMI and mini-jack. At the bottom there is a pair of rubber stands. Thanks to this, the laptop stands taller than a hard surface and the cooling system can easily draw air.

Its keyboard is a real winner in terms of ergonomics, featuring large, soft-touch keys. Blind typing is a pleasure. In the dark, a two-level backlight will prove useful. However, the matte keys are noticeable by fingerprints. The power button is placed behind the keyboard block, so accidental presses are excluded. It has a built-in fingerprint sensor, which is sharp and almost always works correctly. It allows you to unlock the system without entering a password and makes online shopping easier.

The touchpad deserves special praise. It's one of those rare occasions when you can do without a mouse on a Windows notebook. The wide touchpad responds instantly to touch and supports a variety of multitouch gestures. The camera is hidden in the button on the keypad between the F6 and F7 keys - a great solution for those worried about privacy. However, there are a couple of nuances: the low resolution of the sensor does not allow you to give a clear picture, and because of the non-standard angle of view interlocutors are forced to look at your chin. If high quality video calls are a constant concern, a standalone webcam may be the way to go.

The main difference between the MateBook 14 and the D in the name is the 14" 2K resolution IPS touch panel. The screen, thanks to its slim bezel, covers 90% of the body. The matrix is pleased with wide viewing angles, high picture clarity and natural colour reproduction. The display has an unusual aspect ratio of 3:2. This format is convenient for web surfing and working with documents. However, when you watch videos at the top and bottom black bars appear. The notebook is certified against blue light and flicker by TÜV Rheinland to reduce eye strain while interacting with the laptop.

The screen is glossy, which has a negative impact on outdoor use. Due to the glare, it is difficult to see the information in direct sunlight. The situation is not saved even by the limiting brightness value equal to 300 nits (by the standards of laptops, it's a good figure). The gadget has a touch screen with high-quality oleophobic coating, which supports up to 10 touches at a time. Because of the small angle of opening the lid (about 155 degrees) to exploit the device as a tablet is impossible, so the functionality of the touchscreen raises questions. In addition, the Windows operating system is not particularly friendly to touch control.

The test specimen has a 10nm Intel Core i7-1165G7 processor with four cores and a maximum frequency of up to 4.7GHz. There's 16GB of soldered-in DDR4-type RAM. However, the integrated 512GB NVMe M.2 SSD can easily be replaced. To do so, you just have to unscrew 10 screws from the bottom metal cover and carefully remove it without damaging the latches. The gadget runs the Windows 10 operating system. Among the pre-installed software we can only highlight the convenient proprietary utility PC Manager. With its help drivers are quickly updated, performance modes are switched (the same function is available by pressing Fn+P) and Huawei Share technology is set up. The latter allows you to control mobile apps via your laptop, quickly share files between devices and answer incoming calls. But this feature will only function with HUAWEI smartphones.

The performance for everyday tasks is more than enough. Whether it's working with IntelliJ IDEA and text documents, surfing the web or watching 2K movies. In mixed usage mode, the laptop stays slightly warm and the cooling system is almost inaudible.

Now let's touch on the subject of gameplay. Of course, Intel Iris Xe integrated graphics doesn't pull AAA-hits, but it excellently copes with simpler games. For example, the CS: GO shooter at 2K resolution and minimal graphics settings runs at an average of 70 frames per second. Genshin Impact with the same presets gives out 30 fps. And a racing hit Asphalt 9 shows a stable 60 fps even at maximum settings.

The notebook is equipped with a 56Wh battery. To test its battery life, we turned on optimal performance mode and set the screen brightness to 50%. When working in "Google Docs" via the Chrome browser, the device drained by 5% in half an hour. When playing a looped FHD clip, the device lasted 10 hours and a YouTube video spun for 9 hours. For a compact and fairly productive gadget, these are decent results.

The manufacturer was one of the first to unify power connectors in mobile computers. The USB Type-C port replenishes power, so no more worrying about leaving the cable at home. The laptop can even draw power from a phone charger, although it needs to be at least 10 watts (otherwise a plugged-in MateBook will slowly lose interest). We checked the charging speed with the included 65W power adapter. The results were as follows: in 45 minutes the battery is charged to 50%, and in 2 hours and 10 minutes it reaches 100%.

The new device turned out to be a success in almost all respects. The only things you may question are the glossy screen coating and the webcam picture quality. If you don't want to overpay for a 2K touchscreen display, consider the more affordable MateBook D14. It has both a matte display and the usual matrix aspect ratio of 16:9. Otherwise, the devices are similar in many respects and boast a decent battery life, decent performance, a pleasant chassis, and a user-friendly keyboard and touchpad.