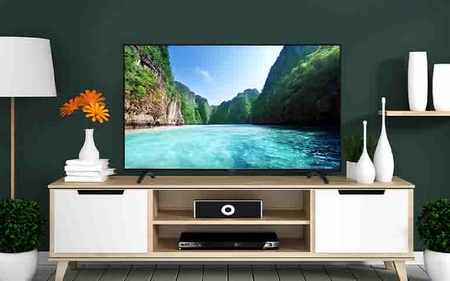 It's easy to explain the demand for this particular TV. For a start, it has the right size. Because the 32-inch screen, which once seemed huge, is no longer impressive - now people have computer monitors the same or even larger. A 43" diagonal, on the other hand, is just right for most people. Full HD resolution is also acceptable: at optimal for these dimensions distance to the screen no difference from 4K is noticeable, and the price difference is significant.

Another compelling argument: Harper 43F720TS is a smart TV set running Android TV 9.0 (the official version on board). This means that its functionality can be expanded almost infinitely by apps from Google Play. Well, or from a flash drive - you name it. It doesn't need additional sources, such as set-top boxes or players. YouTube and Netflix apps are already in memory, but you can install any video service you subscribe to, including ivi, Kinopoisk HD, Okko and MEGOGO.

Although the TV's screen is nominally frameless, it's not completely frameless. But they are so thin that they seem to be absent. For the sake of such elegance, we had to use Direct LED backlighting. Its diodes are placed behind the matrix, so the light is distributed more evenly than on Edge LED TV where the diodes are placed in the frame allowing the cabinet to be thinner. But we don't look at the TV screen in profile, so its thickness isn't the most important thing.

You could mount it on a table. Or alternatively you can hang it on the wall for which you need to buy a VESA 200 x 200 compatible mount and at the same time remove the legs - supports if you hurried to screw them on after unpacking. It is useful to place the soundbar under the screen, but with a small space between it and the TV set to make it convenient to use the joystick button in the centre of the bottom edge - it will be useful when the remote control will fall under the sofa.

The model has a pair of 8W speakers with an amplifier, but let's be honest: they sound a bit thin. So it's a good idea to think about a soundbar. You can replace it with a 2.1 computer speaker set only if it has a digital optical input, as the TV has no analogue output - only Toslink. There is no headphone output either, but there is a Bluetooth interface for connecting wireless gadgets. Obviously, the developers relied on users who are bound to have Bluetooth headphones.

The telly runs Android TV, so we won't go into the tedious details of the first set-up - the procedure is standard. Somebody will be disappointed when you connect via Wi-Fi because the built-in WLAN adapter only works in the 2.4 GHz band. But this will only upset the occupants of multi-storey buildings, where the airwaves are clogged up by piles of access points. To solve the problem there is an alternative way out, or rather input - the Ethernet connector. Of course, pulling a twisted pair from a router to your TV is tedious and ugly, but the connection will be stable and reliable.

By the way, you're unlikely to get terrestrial TV in densely populated areas of new buildings - reception quality in the "stone jungle" is usually awful. Although the built-in TV tuner supports all types of broadcasting, it has inputs for conventional and satellite antennae as well as a CI expansion slot, let's be frank, these are options just in case. Or for people who live near a TV repeater. The desire to watch the airwaves may also arise if your internet connection goes down, but this problem is much easier to solve than fixing your TV reception.

Being a clever piece of equipment, Harper is able to receive content over IP protocol. This means that the selection of video services and online cinema is entirely up to the user's tastes. Both YouTube and Netflix are fitted straight out of the box, and there are buttons on the remote control for easy access. It's chic, by the way, with a silver faceplate. There is also a button to call the Google voice assistant and of course the microphone.

The 43F720TS has two USB ports, one 2.0 and the other 3.0. Both provide power easily not only to USB sticks but also to external HDDs without a power supply. Many people use them to store video files in case of a force majeure such as an Internet blackout or a 25-storey building suddenly erupting between you and a TV repeater, so you can't watch the broadcast any more. This is where a film archive on mass storage comes in handy.

The TV has a built-in media player, but it does not understand anamorphic video in 21:9 format - it shows it in 16:9, that is stretched vertically. Even if there was an Aspect Ratio button on the remote, it wouldn't help. What you need here is a player that knows how to detect the correct aspect ratio. For example, VLC is completely free, so go to Google Play, install it and be happy.
The device is built on a VA matrix. Its main advantage over IPS is the deep blacks, better contrast and a richer picture. The dynamic contrast ratio is 900,000:1, which is a very good figure. Where VA is inferior to IPS is in the viewing angle horizontally. If you are going to watch TV in a big company, the IPS is better, but for viewing, say, two people - the VA is better.

The response time of 8 milliseconds is considered good for this type of matrix. Low cost IPS is not much better. For movies, even fast-paced, and more or less calm games, the index is normal. No one promised the speed of an expensive gamer's monitor. Nevertheless, the TV offers a special image preset for games, when the picture becomes slightly richer and more contrast. There is also a PC mode - useful in case you need a large computer monitor.

Colour reproduction here is accurate right out of the box, but if you want it is easy to correct in the settings - there are level controls on the three colours. You can adjust gamma as well as, of course, brightness and contrast. Although expensive TVs have wider possibilities of fine correction, it is still impossible to use the advanced possibilities without special devices.

Thanks to the 4-core ARM Cortex A53 processor, the interface runs smoothly and without heavy braking, and the ARM Mali-470 GPU does an excellent job of rendering its elements. 1.5 GB of RAM seems a bit small, but this is not a smartphone with a bunch of applications installed. The TV uses only a few specialized programs. The 8 GB storage is also OK, taking into consideration the possibility to expand it with USB memory sticks.

Harper 43F720TS is sleek in appearance, easy to set up and manage, requires no additional sources and players, pleases with picture quality. The only pity is that its Wi-Fi adaptor works in 2.4 GHz band, and the lovers of impressive sound will have to take care of a soundbar. A simple active loudspeaker won't do - the TV has no analogue sound output. And this is, perhaps, its only drawback. More precisely, it is a feature you just have to bear in mind.